Content to Help You Guide Children Through Their Math Education 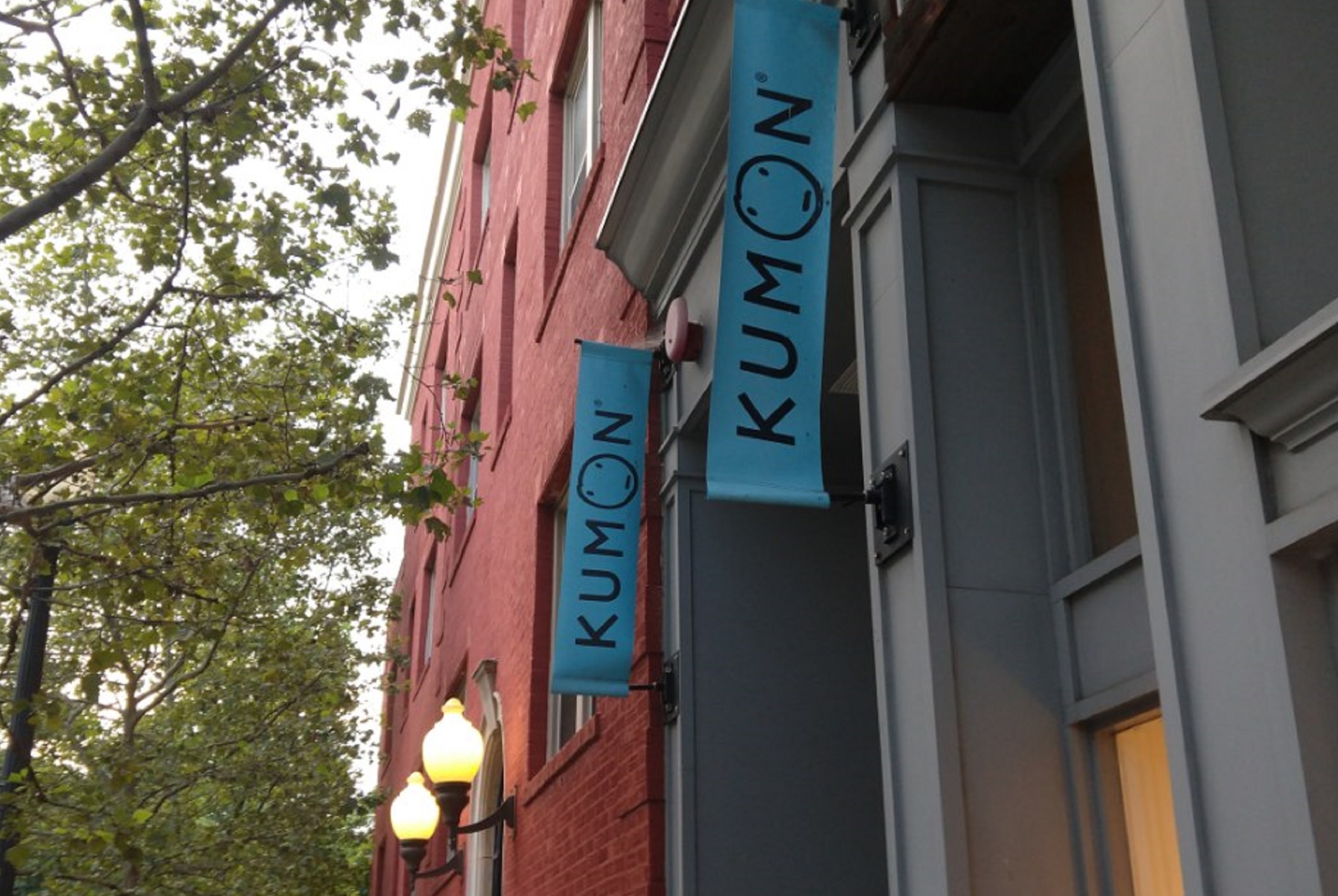 Are you looking for an extracurricular learning program for your child to enrich his or her math skills? With many options out there, it can be hard to know what’s best for your young one. I have visited and looked into multiple businesses to learn what separates them including their philosophies and processes.

One of these, Kumon, was started in 1951 in Japan, has around 1,500 locations across the United States (and many more internationally), and covers both math and reading (though for our purposes, I will only focus on the math). They take a very traditional approach, with an emphasis on math facts and standard algorithms, efficiency, working beyond grade level, and independent learning.

I visited one of their enrichment centers near me in Washington, DC to see what they are all about.

The center was quite a large space that included a separate waiting room and work area. I would soon learn that parents are not actually permitted in the student work area, thus the division. In the work area itself, there was a lot of room for the kids which was well-organized and had distinct areas for the smallest children attending and the older kids. One thing to note is that each individual center can be very different depending on both the amount of space and the instructor running that location.

Here in DC, I spoke with the Instructor, Erika Walker. Walker was a teacher for 20 years at middle schools and high schools in the area before starting at Kumon three years ago.

I also reached out to some parents who had enrolled their children in the company to get a fuller picture.

I had a lot of questions and here is what I found out:

How do they meet the specific needs of your child?

After an initial written placement test graded on both accuracy and the time taken to complete it, the instructor develops a one year plan. Kumon’s curriculum is already developed and leveled, so the placement test simply determines where your child starts. The program covers counting through calculus, with each kid working at their own pace. Each child starts with some review of foundational skills, both to give them some confidence and success at the start and to ensure that there are no gaps in their learning. There is no flexibility in the curriculum. One parent I spoke with said that when their child was starting fractions in school, he asked if he could have some fraction work incorporated into his time at Kumon, and the answer was no, that he must stay on his learning plan track. Because of the inflexibility, and the lack of challenge and engagement, this parent ultimately decided to pull both of his children from Kumon, afraid that his children would be turned off to math. 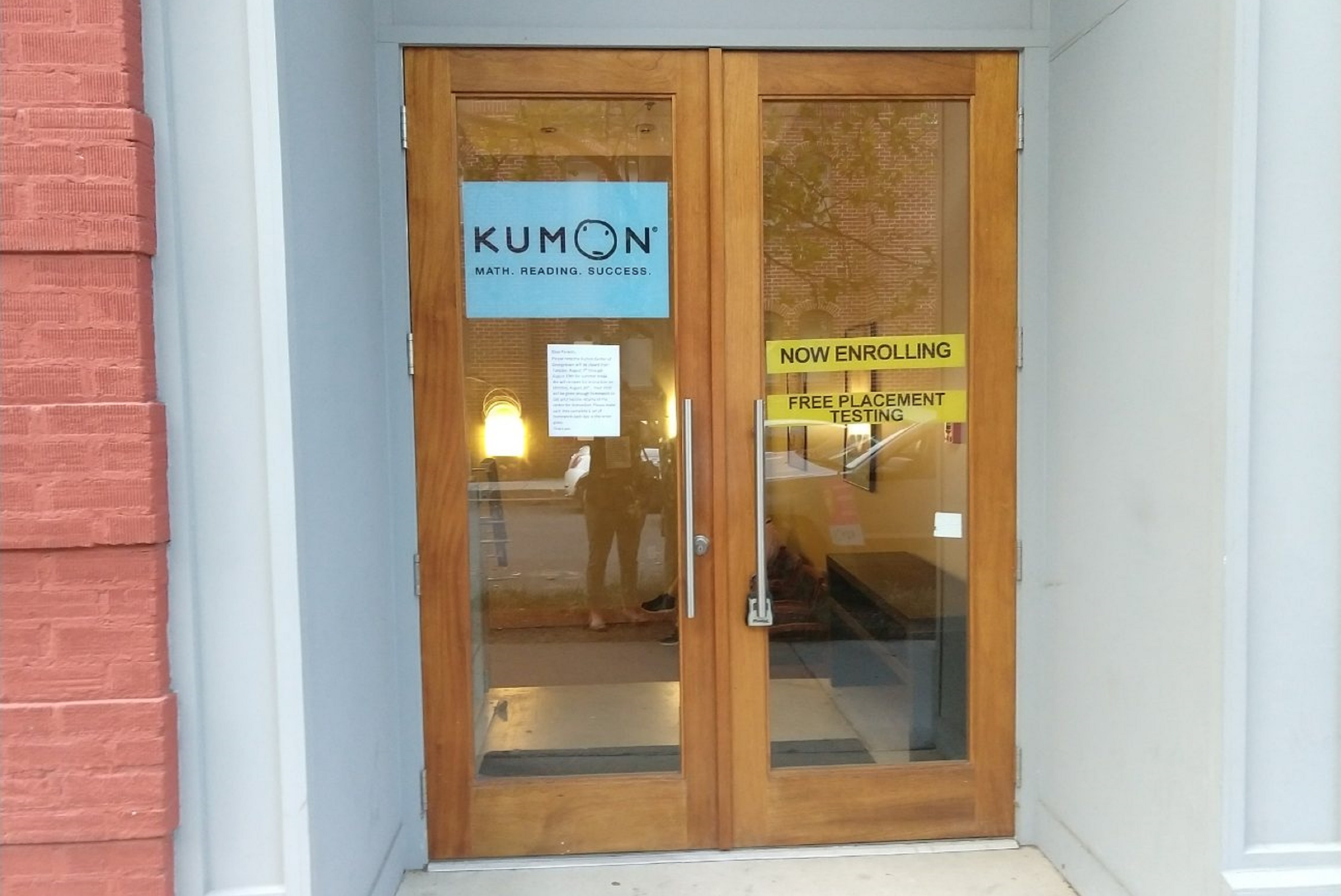 Children attend the center for two 30-minute sessions each week, and have 30 minutes of homework to work on each day that they are not at the center. According to parents who attend the center, though, this can vary quite a bit, as a given session could last just 10 minutes and another could go for 40 minutes. This can be especially tricky when you have more than one child attending the center or are otherwise coordinating your schedule.

During center time, children complete worksheets from their folder, reading the examples to figure out how to do the problems. If they have trouble, assistant teachers are there to offer guidance. They do not teach the kids how to do the problems, but will give helpful hints. There is also a good bit of repetition and spiraling back to topics covered earlier to ensure a solid understanding. When they finish the prescribed worksheets for the day, they turn them in to be graded. If they do not get 100% on the sheets, they are tasked with figuring out what they did wrong and fixing it before they can complete the session.

By completing their homework, kids can earn Kumon Dollars that they can save and trade in for prizes. There is a display of the possible prizes on the wall in the work area to offer some extra motivation.

What outcomes should be expected?

After attending Kumon, you can expect that your child will have good recall of their math facts and know their math procedures well. They will know how to do a lot of things in math (often beyond their current grade level) but they will be unlikely to gain a deep understanding behind what they learn. The program aims for efficiency, so kids learn and memorize the most efficient ways to solve types of problems, but in the meantime they do not stop to figure out why an algorithm or specific procedure works. As a result, you end up with a kid who does not know how to reason or strategize. Instead of mathematicians, you end up with good memorizers.

Now, you may have a kid who is really struggling with recalling their math facts, and I have personally seen kids who have attended Kumon improve tremendously with their multiplication and division facts. However, I still have to wonder if it is a result of Kumon specifically, or if they could have simply devoted the same amount of time each day to learning these facts instead of paying for and attending the center.

I have also seen these same kids who come out of Kumon knowing their facts really well (and have extra confidence in math as a result, which is great!), but who then think they already “know” multi-digit multiplication and division since they learned the algorithms, but have no idea how or why those algorithms work. And so, with these kids, as a teacher I need to work backwards, trying to in a way erase the work they have done because they end up trying to use it as a crutch, falling back on this procedure they have memorized instead of doing the work as a mathematician and figuring out the meaning behind it.

I did speak to one parent, though, who was very happy with the way Kumon developed good work habits in his child at a young age. The consistency of having homework or center time every day of the week helped instill in him a solid work ethic. He recommends sending kids there early on until the end of second grade, when they can get the basics and plenty of repetition.

Who are the instructors?

There is one instructor at each Kumon center, with a number of assistant instructors. Some assistant instructors are tasked solely with grading classwork and homework and do not work with the kids (these tend to be high school age kids), while others are there to give guidance to kids as they work on their worksheets. The DC center currently employs a total of eight assistant teachers.

Why do parents choose Kumon? How involved are parents in the process?

Erika Walker finds that there are a number of challenges that lead parents to seek them out. Their child might be struggling in class and need some extra support; their child might be ahead in math and their parents want to keep pushing them ahead; or they simply want to give their kid an extra head start in math.

Homework is given for every day that a child is not at the center, which should take about 30 minutes each day, and parents are expected to grade this work. Kumon encourages parents to set up a routine at home—a time of day and space in which their child can complete their Kumon work.

There is open email communication throughout the program, with face-to-face meetings after 6-8 weeks, and again after 6-8 months.

Do they collaborate with teachers?

Kumon does not collaborate with teachers. While with parent permission, they can communicate with a child’s teacher(s), in the three years that Walker has been the instructor at the DC Kumon center, she has not once contacted a teacher.

Regrettably, I find that Kumon has a bit of a dismissive attitude toward teachers and tutors. There is a lot of talk on their website about how their program is more effective than classroom teaching or working one-on-one with a tutor, but I struggle to see how that is true. When you boil it down, it is simply a lot of time spent on worksheets which do not in any way follow Common Core, so they do not complement what your child is already doing in the classroom. Even in the most basic math classroom, your child is getting something much more dynamic than just some examples on a worksheet.

It is great to get extra practice and support outside of school if your child needs it, both to help them get better at math and also to increase their confidence in the subject. But Kumon does not seem to understand that it is a team effort– parents, teachers, and tutors all have the same goal, to help the child be successful. Collaboration is key, and purporting yourself to be the one solution is simply unhelpful.

How much does it cost?

While the cost varies depending on the market, in DC Kumon costs $175 per month, which comes out to about $38.89 per hour (compared to about $70 per hour for one-on-one tutoring in the DC area).

While Kumon is an established learning center that has been around for decades, I am personally not a fan of it. I dislike that 1) They focus on calculations and speed, rather than critical thinking and problem-solving, 2) They push kids ahead, but with no understanding of the meaning behind the algorithms or developed number sense, 3) They do not follow Common Core or collaborate with children’s teachers, so they do not in any way complement what goes on in the classroom, and 4) It is a lot of extra worksheet time at home, which can be frustrating for both parents and kids.

Submit your email address to receive updates from BookSmart Math.

You have Successfully Subscribed!